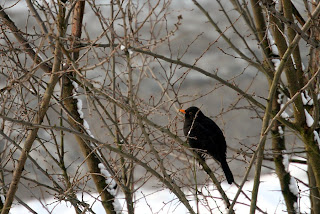 Nice photo....do you like its song or its silence?

Goes with the same question as you asked...not being a loner -- good or bad?

I think its all together -- loneliness, friendships, silence, songs, chatter -- makes life worth living -- no?

it was so casual questions....without a smile, it looks like interrogation :)

Too cold to sing? The clouds chased the sun away early this morning, but we still enjoyed a fairly warm day.

Reminds me of a very old movie called Pathfinder that I saw a very long time ago.....which featured this bird or something like this!

dev - he has a beautiful song but they don't start to sing until mid-february or later.
i guess it depends - i often miss terribly some alone time but there are times when i crave company...
and yeah, it's all a part of life
oh, and don't worry - smileys are nice but your post didn't sound wrong in any way :)

quilly - too soon rather. i haven't heard a blackbird singing before mid-february, and even that is early. young inexpetienced males usually start first
a terribly dull and grey day yesterday but some pale afternoon sun today with below freezing temperatures all the time

get zapped - it definitely is

I like the way this one sits next to the previous snowy mesh image. It's like everything is constructing a cage to protect it from the elements.