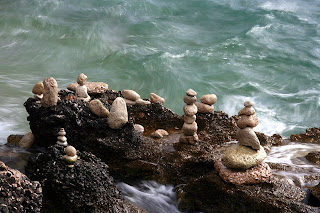 Outstanding photo - those sea cairns are fascinating to see.

I love the looks of the water in this composition -- and why don't those cairns topple?

Oh i love that photo and caption, Polona :)

it looks like the little stones we arrange for a game called the 'seven tiles' we used to play in childhood....seems the waves are set for a game! :)

i discovered these cairns on the part of the shore where there was a nude beach on an overcast, partly rainy day. it was quite amazing seeing the sea lift from almost perfectly calm to force 3 or 4 (i'm not an expert but i reckon it must have been that much) in less than half an hour. the waves toppled some of the cairns (as can also be seen in the photo) but some were so perfectly balanced that they successfully defied the elements

Amazing. Such a great find. I'd have to make up stories as to how these got here! Good to read your comment explanation too. I seriously wondered if they were wired into place until you said some had fallen.

so you wait there for half an hour to take breath taking shots. nice one! perfectly captured.